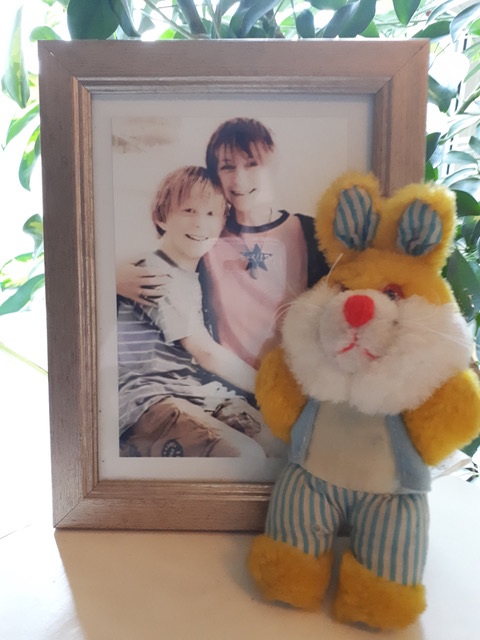 With a sea breeze blowing and the waves whipped up into a lovely shade of brown, the Stepping Out group in Kent joined forces with the SOBS charity (Survivors of Bereavement by Suicide) for a bracing walk along the Thanet Coast in Margate. Kim Conway was among them. In her bag, she carried a toy rabbit and a photo of her younger self smiling alongside a cheeky-looking young boy with a blond fringe in his eyes. “That’s Kai,” she said. “My son. He took his own life two years ago. He was 20”.

For the next three months, Stepping Out is involved in a joint programme of walks & lunches with the Kent branch of the national charity, SOBS, which supports people affected by suicide, as part of the Kent & Medway Sustainability and Transformation Partnership (STP), “Saving Lives” campaign.

“I know that some people might be worried about mentioning Kai to me. But I always say: ‘Please do!’. Then I can talk about him. There are no words of consolation. They’re all platitudes. But I say don’t worry about the words. Thank you for acknowledging him. Don’t leave him unspoken.”

So not leaving him unspoken, here is Kai’s story, told by his Mum.

Kai was a lovely lad. I would say that, I was his mother. But he was really special. He shone with creativity. He was a ballet dancer, he wrote poetry, he loved cooking. He’d spend two days making a feast for the family. However, it soon became apparent from a very early age that he had real mental health issues. He would take ten times longer than any other child to calm down if he was upset. He’d be inconsolable. From a toddler, he’d have hallucinations, unable to tell reality from non-reality.

He was taken to see a child psychologist in Holland – he lived there with his father because I had very bad post-natal depression after he was born – and he received misdiagnosis after misdiagnosis. By 15, he’d left school for being too disruptive. He could be very violent. He spent time in one of Holland’s most secure psychiatric hospitals. He went from pillar to post. Finally, at 18 another psychologist identified a grey area on the autistic spectrum and he was diagnosed with something called Multi Complex Developmental Disorder which has yet to be fully recognised. My ex, Remko, and his family have set up a foundation to do research on the condition in Kai’s name.

As part of Kai’s diagnosis the psychiatrist asked if there was any history of mental illness or depression in his family. Remko said yes: because my mother was schizophrenic and lobotomised when I was six years old. She died shortly afterwards. And my husband’s father committed suicide when Remko was 11. So Kai had a toxic mix. Poor old Kai was really suffering. But when he wasn’t suffering he was really special.

“When the news first reached me that he had taken his own life, it wasn’t a massive shock. He’d been trying to kill himself since he was 15.  To be honest, I’d always had this black cloud waiting for the phone call.  I went into shock: shaking, absolutely ice cold. Then I had to get over to Holland. I didn’t have any money at the time, so I booked the cheapest coach I could find early in the morning and sat there at Victoria thinking: ‘I can’t do this’. It was five days since Kai died and I was frozen. I sat there on a bench watching the coach pull out of the station.  Then I thought: ‘I have to do this. I have go for Kai. Say goodbye. Honour him.’ So I quickly rebooked on the evening coach instead.

I arrived in time. I did manage to spend 24 hours with him, alongside his body in a peaceful room at the crematorium, telling him how much I loved him and saying my goodbyes. I was so glad I was able to do that. It was a big….acceptance. If I hadn’t been able to see his body it would have been so much harder. 350 people turned up to his funeral and it was a five hour service. They don’t give you half an hour and tell you to sod off, like they do in England. There was classical music and readings and it was very, very beautiful. There was a Celtic Drum and it beat our path to the graveside when he was buried. That actually broke my heart.

I go twice a year to visit his grave, once on his birthday in January and once in the summer. It’s really a celebration of Kai’s life. There was so much more to Kai than just his illness. He was amazing. He once wrote a poem about the “darkness getting the better of me”. He was bright, beautiful, bubbly and loving but the illness was bigger and darker than even all that. And he just said to himself I can’t deal with all this darkness any more. He really did believe the world would be a better place without him.

“… we don’t dwell on his illness. We dwell on the Kai we knew and loved. It’s such a lovely time when we visit him. He’s buried underneath a tree in a beautifully-tended Dutch graveyard. There’s a few people that knew him. We all meet up. We sing songs. We tell stories of Kai. We take a flask of tea, sandwiches, I make something and we share it on the grave and sing “Happy Birthday” in January and light candles.

“It’s so nice and peaceful there, out in the countryside, just beyond the walls of one of the oldest cities in Holland called Zutphen where Kai used to live. It’s a jewel of a place, quintessentially Dutch. It’s the sort of place where the chimes of the clock tower are rung by a guy with handbells every quarter of an hour. That’s his job. When David Bowie died he rang out “Life On Mars” on his bells.

“I’ve learned the root of grief is love. It’s love with nowhere to go. Everything is stripped away. You’re just left with the real profundities of what life and death is. In the first year after Kai’s death, when I started to come out of my shock – when I laughed at a friend’s joke or something, I’d feel guilty. I thought I wasn’t grieving. But now I can have these little party moments, I can have a little dance with him if I hear his favourite music.

“And this little rabbit I carry everywhere, he gave it to me. He was 12, we had a little bike ride together. When we came back he just stopped. Someone had dropped this little rabbit. He just looked at me and went: “From me to you”. I’ve kept it always.

“I’ve had help, of course. The people at SOBS were lovely and spoke to me on the phone when I really needed them. A couple of days after Kai died, I found them on line. I didn’t know what to think, what to do and I’m really, really glad that I met Jackie, the organiser of the Thanet group, who helped put the Stepping Out walk together.

“It was a lovely day – wonderful to meet new people while having the support of Jackie there too. I loved the very fact that a friendly group had reached out to us, thinking ‘Let’s invite these people because they may be having a tough time’. It was a good physical work out because we were going for a walk but it was the reaching out that was such a gift. I’d like to thank everyone so, so much.

I’ve learned it’s not wrong to celebrate Kai’s life with myself and all sorts of other people. My way of coping now is that whenever I think of him I have to stop being miserable. We don’t know if there’s an afterlife, if he is looking at me from some kind of spirit world. Maybe there isn’t an afterlife. Maybe he’s just gone. But I don’t want to take that chance.

So I’ve chosen to believe he may be around. I try to fight against misery. And I do break down sometimes, of course I do. Then I say: “Oh sorry Kai, but I just miss you mate.” But I’m trying to find – it sounds weird – a positive grieving process. I am just so grateful that he chose me to be his mother. Yes, my son died. But we all die. Life is very short really in the grand scheme of things. I’m very grateful that I knew him. My grief has turned into gratitude because he changed my whole life. He changed me into the better person I am today.

For more information about Stepping Out Walks: www.carerssteppingout.co.uk

Happy Sunday! . Where will you be walking today? 🚶‍♀️ . This beautiful shot was captured by Sue Mott in 2019, isn’t it stunning? 🙏 . . . . #hopecove #devon #bliss #scenicview #walking #lovewalking #january2020 #thisprettyengland
2019 has been a brilliant year for Stepping Out and as we reflect on our walks this year, we’re busy planning new walks in 2020. . We will continue to share our 2019 walks with you throughout January. HAPPY NEW YEAR to all our carers and those they care for. #happynewyear #newyearseve #newyear
One of our glorious walks earlier in 2019 took us to Bedgebury Pinetum in Kent. . A huge thanks to @forestryengland for an unforgettable day for all our carers - such a special place. . #bedgebury #pinetum #bedgeburypinetum #kent #steppingout #carersstepout
It’s been such an amazing year for Stepping Out and our sociable walks in beautiful locations. We would like to thank @englishheritage for working with us this year. We all had such a brilliant day at Walmer Castle in October. 🙏