Stepping Out with Carers in Kent

A wonderful final video of 2019 to round off an amazing year for Stepping Out and our  fun, sociable and healthy walks in beautiful locations. We’re currently planning exciting walks for 2020 and will be announcing the dates in the coming weeks. We would like to thank our carers and those they support for being interviewed for this film and sharing their experiences. We will be sharing longer versions of individual interviews throughout January 2020.

Stepping Out with Carers in Manchester

Thanks to the carers from the Manchester Carers Forum and Gaddum Bury Carers for being our film stars at Heaton Park, famous for being the largest municipal park in Europe. And to the the Manchester & Salford Ramblers for guiding our two Stepping Out walks on the day. For the story of the day, do read the blog by one one of our carers, Jack Coupe, a tremendous character and contributor to the film himself. https://carerssteppingout.co.uk/2019/10/17/walk-in-heaton-park-manchester/

The tremendous success of Stepping Out in Manchester is a testimony to all involved as well as a network of public transport that helps make the adventures accessible. The film is a reminder that even in the midst of busy urban life, a relaxing walk somewhere green and beautiful amongst good friends is right there – on your doorstep.

The voices of carers very often go unheard. Even by themselves. So great is their focus, often their sole focus, on the care of someone close to them. A husband with Parkinson’s, a wife with epilepsy and bipolar, a daughter with Downs Syndrome, a son with heroin addiction and psychosis,  a dad with dementia, a mum with multiple challenges like chronic arthritis, kidney cancer and the after-effects of a stroke.

It can be a 24-7, hyper-responsible life on the edge of the crisis, and so a few carers have the time or the energy or the will to relax, recharge and look after themselves. Least of all, to tell their story to the outside world, which may be oblivious to the everyday, quiet, domestic heroics taking place in our midst.

In Carers’ Week 2019, STEPPING OUT is launching two ground-breaking  projects to let carers and the people they care for open the door on their lives and tell their own stories in pictures and words.

CARERS LIVES IN 100 OBJECTS – THE STEPPING OUT VIRTUAL MUSEUM is taking exhibits from all round the country – featuring objects that symbolise their life as a carer and why it means so much to them. Step into the online pages and you’ll find why a uniquely-decorated cup and plate has a vital place in the heart of Ann who looks after her son Leon. Or why the picture of a pair of men’s boots in the Sahara desert is such a powerful consolation to Kim following the death of her son, Kai, by suicide.

The first six treasures will be added to our Museum, one everyday during Carers’ Week, and we’re inviting people who are carers and those they care for to nominate their own exhibits for the Museum until we reach 100. Then we hope to host events with the real objects on show and the carers on hand to tell their own stories either on film or in person. British Museum? Tate Modern? Turner Contemporary? We’re happy to talk to anyone.

THE STEPPING OUT HOT POTATO PODCAST invites carers to get together and talk about the issues, joys, challenges, fears, rages, laughs, love and pain that being a carer can entail. No subject is taboo. It is real carers talking about real life. You can find the recording of our first podcast on our website and future episodes will also include chats with people who are cared for – because their voices are just a significant in the caring community – and experts to shed light on particular issues.

We will be inviting listeners to send in their own subject for discussion and given that there are an estimated 7 million carers in the UK, according to figures from the Carers’ Trust, we can expect a powerfully-informative and varied set of themes.

Tim Hollingsworth, Chief Executive at Sport England said: “Everyone, regardless of their age, gender, ability and background, should have access to the benefits of an active lifestyle. Yet sadly we know people with a disability or long-term health condition are disproportionately less likely to be active. Sport England works to break down the barriers that people face in getting active and that’s why we are investing National Lottery funding into programmes like Stepping Out. “The results from the Stepping out Pilot Programme speak for themselves. Participant’s confidence improved, they felt more resilient and able to cope, and less socially isolated and lonely. That is the power of sport and physical activity. “We have been delighted to see it engage more people and exceed its targets. The rising demand for providing a service where carers and the people they care for can get active shows that there is much more potential here to support more people out of inactivity. And it is this group that has the most to gain from getting active. We hope to see Stepping Out go from strength to strength.”
Vanessa Griffiths , Chief Executive at the Ramblers: 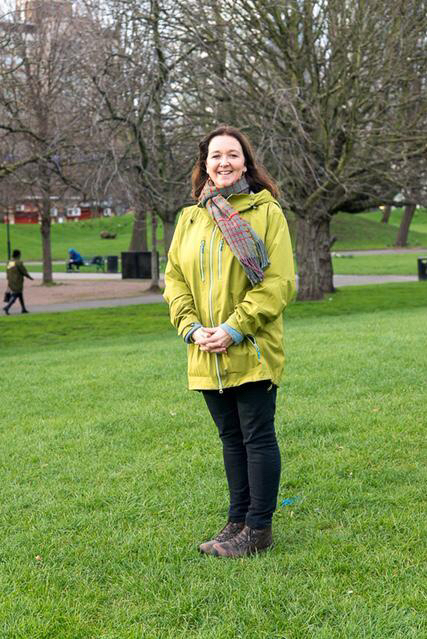 “I would like to wish all the Ramblers Stepping Out walkers a wonderful time during Carers Week – whether they’re playing walking football at Manchester City or exploring beautiful green places that we are so lucky to have in abundance round our country. It has been a real pleasure for the Ramblers to help deliver this Sport England funded Stepping Out programme, in its endeavours to bring the joys of walking to people who have so many challenges in their lives. I would like to thank our amazing volunteers all round the country – in Manchester, Doncaster, Herts, Kent, Essex – for being a fundamental part of the success of the project. I have been on a Stepping Out walk and can personally attest to the pure fun and healing properties of a group walk in the open-air, chatting, laughing sympathising, exercising, socialising. It never fails to make the world seem a little brighter. So happy Carers Week and look forward to seeing you all again soon.”
Giles Meyer, Chief Executive, Carers Trust
“The figures are quite scary really. The number of carers are going up in the UK and are predicted to rise to 10 million by 2030. With that staggering increase, overall funding decreasing and ageing population, the whole situation is very challenging. It is estimated that one million carers are looking after someone for over 50 hours a week. Lots of people get no breaks whatsoever. How old do they care for their own well-being? The effect on their physical and mental health is huge and they are the ones who potentially end up with mental and physical issues of their own.
This is why physical exercise and social interaction at community level is so hugely important. Walking programmes like Stepping Out are particularly good I think because you meet people who understand your situation and you can provide support to each other. The conversation isn’t forced, as it can be when you are sitting in a room. It comes naturally. It is a great way of breaking down loneliness. So good luck to Stepping Out this week and I look forward to joining you in the future for one of your walks.”

Learn more about the Stepping Out walks for people who are carers and those they are caring for. An opportunity for a social exchange of stories and conversation, providing valuable exercise, our walks give carers and their charges a couple of hours to get out and about in a sociable setting and enjoy lunch. Our walks would not be complete without Bernard our caring Cockapoo, featured in this short video.

Here is a video clip from a wonderful scenic walk we organised in September 2018 with many carers and those they care for in the beautiful surroundings of Penshurst Place, Kent. You can hear what they had to say about the glorious day here:

Sports Minister Tracey Crouch joins a Stepping Out walk at Aylesford Priory in Kent. “I think it’s a wonderful project. It’s getting people physically and mentally well but also from loneliness perspective getting people together in a friendship circle. So for me it’s an amazing initiative.”

Kent carer and Stepping Out walker, Lynne Smith, on the ongoing challenges of looking after her brother: “It’s like living two lives.”

Just in case you’re in need of some cheer today! 😉 Here’s Ron one of our lovely Stepping Out walkers during a fabulous Kent walk in 2019. “We’ll meet again”, so poignant with the recent Coronavirus crisis. Stay safe and well and we will meet again soon. 🚶‍♀️ . . . . . #dailyexercise #wewillmeetagain #carersstepout #veralynn
To all our wonderful carers we’re sorry to announce that STEPPING OUT CARERS WALKS are suspended until at least the end of May due to the Coronavirus outbreak. As you can see from our photo of @bernardlovessteppingout here he is feeling a bit sad as he loves our walks as much as our carers. However, carers, those they care for, volunteers and partners are very welcome to join our new initiative STEPPING OUT STAYING IN- so we can all stay connected while enjoying Nature, activity and the company of friends in the safety of our own homes, including: A talking service, via telephone, email, WhatsApp, Facebook & social media. Photograph & Story sharing Information-exchange, Healthy recipe swap Activity and exercise suggestions, WhatsApp groups, Online book club, Shared interest groups, Virtual walks, (by film, photo and description) Brilliant tips on how to pass the time when you are ‘self-isolating’, Bernard updates (our mascot dog) - other pet celebrities very much welcome, Film and television reviews…and more If you would like to know more contact: hallosteppingout@gmail.com Please note: Official Government advice states that, apart from people who are in households with symptoms or who have pre-existing health conditions that put them at increased risk of contracting COVID-19, going for a walk independently can continue and is an excellent way to maintain health and wellbeing - provided independent walkers stay more than two metres from others. 🚶‍♀️
HAPPY FRIDAY! . We’re so proud to have received this amazing award by the lovely people from Care Uk, we simply had to share with you! We love what we do! 🚶‍♀️🙏 🥳 . #localheroes #careuk #carers #carersstepout .
We’re so proud to receive our latest award from @careuk as 2020 #LocalHeroes in Kent. . More about this in our stories! Good luck to Cheryl and @montfortmanorcarehome and huge thanks to @holeparkgarden for our great day our together. . #wellnesswednesday #carers #careuk #localheros #kent #carerslife #instagood #instawalking